Young Justice
The Riddler is a riddle loving supervillain and enemy of Batman.

Unknown to the Justice League, the Riddler comes back and as a part of the Light. He stole a suitcase from S.T.A.R Labs as Sportsmaster starts a riot outside the lab. After the Klarion's plan failed, his real plan succeeded as the suitcase contained a part of Starro that Black Manta was trying to get from before.

Recently, he ambushed the Young Justice, along with Mammoth and Cheshire, but is easily defeated by Zatanna and Robin. He begs not to be sent to Arkham, but to Belle Reve. 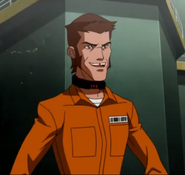 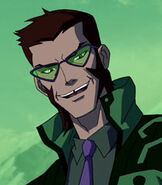