"My wife was on the phone, when the lights went out. She's freakin' out. Wants me to quit this place!"
―Thomas Armbruster[src]

Thomas Armbruster is a security guard working the night shift at Arkham Asylum, one of the many present during the Joker's takeover of the asylum. He wears a trainee tag on his uniform which suggests he is a relatively new employee, hired as part of Arkham director Quincy Sharp's recent expansion of the asylum security force.

Thomas Armbuster was among the many security guards at Arkham Asylum, as the Joker was recaptured by Batman. As Joker was taken down in to Patient Handover to be signed into a cell block by Police Commissioner Gordon, Thomas was on guard duty on the lower floor, along with several other Arkham security personnel led by Henry Smith.

After an subsequent power failure, Armbruster witnessed Batman preventing Joker from escaping. He apparently thought it better that Batman took the opportunity to stop the evil clown once and for all by strangling him in the dark, stating flatly that it would have done everyone good. Thomas also briefly mentioned his wife, who is concerned for him due to the dangers of his new job. She had attempted to call the asylum during the power failure, trying to reach her husband and convince him to quit.

Unknown to Thomas, the Joker managed to break free from custody shortly afterwards. Killing his guard and a doctor as they tried to bring him back to his cell, the Joker then released all the Blackgate convicts in the Holding Cells, who had been temporarily transferred from Blackgate Penitentiary, which had recently been destroyed in a mysterious fire. After turning loose all the prisoners in the Intensive Treatment Facility, the area became under code red lockdown. The staff were massacred and the security guards overpowered at the cost of only three prisoners. The Joker took control of the guard radios, sending a fake order to Louie Green and all available members of security to report to Arkham East. Having received the same radio call and unable to return to Intensive Treatment, Thomas Armbruster took up post in the Botanical Gardens. Along with two other security guards, he was dispatched to the Flooded Corridor, which was separated into two sides by a pool of water.

With an army of Arkham guards in the Arkham East courtyard and in and around the mansion, the Botanical Gardens became gripped by a false sense of security. Most staff members believed that the Botanical Gardens would be the last place the Joker and his men would be interested in. However, the Joker had singled out Dr. Penelope Young as a target because she held the formula for Titan, a strengthened mixture of Venom that turned men into monstrous beasts. The Joker hoped to use this formula to create his own Titan-powered army to rule Arkham and use the Titan waste to poison the Gotham River, causing chaos due to the toxins and the fumes which would affect Gotham City. When Dr. Young went to the Medical Facility in Arkham West, the Joker overran the area with his liberated henchmen. Led by the Joker's own henchgirl, Harley Quinn, they succeeded in taking the Medical Facility by storm and kidnapping Dr. Young, but were quickly defeated by Batman. Upon retaking the Medical Facility, Batman allowed Dr. Young to go back to her office in the Arkham Mansion with Aaron Cash to retrieve her Titan formula notes. Undeterred, the Joker loosed his hordes of freed convicts on Arkham East, where they met nominal resistance by the team of guards posted there. Arkham security personnel had trained in riot tactics, but they claimed that the Blackgate prisoners were "like animals". Through sheer numbers and the element of surprise, the Joker's thugs overran the 'impregnable' Arkham East, taking the Arkham Mansion. Several thugs also penetrated into the Botanical Gardens, led by Mr. Zsasz, but the Joker was not yet interested in the seemingly useless recreational area. A total of only eleven guards, including Thomas Armbruster, were posted within the gardens, all at key points. Eventually, the Joker found out about a Titan production lab installed by Dr. Young in the Botanical Gardens' Aviary, manned by two orderlies, Luke Curtis and Robert Stirling.

Thus, the Joker invaded the Botanical Gardens with his men. Victor Zsasz had already disposed of the three guards around the entrance, and the Botanical Glasshouse fell within minutes. But when the Joker and three of his henchmen invaded the Flooded Corridor, the guards fought back aggressively. Thomas Armbruster and two other guards opened fire on the Joker and the other inmates, forcing them to seek cover. A brutal gunfight followed, and over 45 shots were fired during the battle. Eventually, all three of the Joker's men were shot dead, but the villain managed to cross the Flooded Corridor and defeat Armbruster's colleagues.

He captured Armbruster alive, and left several sets of toy chattering teeth around the corpses of the other guards as his trademark. Armbruster, however, he caught and held in a loose strangle-hold, awaiting the chance to use him as a hostage. Meanwhile, after defeating Harley Quinn in the penitentiary, Batman used a D.N.A. scanner to trace Harley Quinn's handprints to find out where she had been on Arkham Island. He tracked her D.N.A. trail through the overrun Arkham East and into the Botanical Gardens, where he arrived at the Flooded Corridor. Upon entering, he could see convicts and guards alike strewn around both sides of the area and a number of spent cartridges, as well as bullet holes in the walls which signified a clash had taken place. The Joker was standing on the other side, his back to the Dark Knight. Knowing that there was little chance of sneaking up on the villain across the water which separated both sides of the Flooded Corridor, he warned the villain, "You need to stop this now. Before it goes too far!" Turning to face Batman, the Joker revealed he had one arm around Thomas Armbruster's neck and another pinning the guard's left arm behind his back. He asked, "'Stop?' but everyone's dying to see what I do next!" Gesturing at Armbruster while the helpless guard looked around in wide-eyed terror, Batman demanded in a desperate tone, "Let him go, now!" To Armbruster's surprise, the Joker responded, "Really? Okay, if you say so, Bats." The Joker then revealed the true meaning of his statement. He kicked a generator box used to power the lighting into the Flooded Corridor's pool of water. The water became instantly electrified. Seeing his actions, Thomas Armbruster begged Batman, "Help me! Please!" Then, before Batman's horrified eyes, the Joker took Armbruster to the edge of the electrified water and threw him in, where he sizzled. The water instantly electrocuted Armbruster, killing him. Glancing at Batman, the Joker let out an innocent 'Whoopsie' while Batman shouted, "No!!"

Then, walking over to the doorway leading to the Flooded Corridor's junction at the Elizabeth Arkham Garden and the Aviary, the Joker pressed a detonator button in his hand, blowing up the doorway and sealing it with debris. He then taunted Batman: "Really got to speed things up, Bats. At this rate you'll never catch me. Ha Ha Ha Ha!"

In order to deactivate the electrified water so as not to suffer Thomas Armbruster's fate, Batman was forced to shut down the electricity to the Flooded Corridor by going to the Glasshouse Generator Room. However, the Joker had already dispatched an army of his men to seize it and deny Batman entry. The Dark Knight fought his way past the henchmen and managed to cross the Flooded Corridor safely, continuing his pursuit of the Joker.

Thomas can be saved from death if the electrified water is deactivated first. The Joker would comment that Batman is always one step ahead of him and leaves without hurting Thomas.

If the electrified water is deactivated first Thomas survives this encounter after that Thomas must have hidden somewhere safe in the gardens because of the Joker's Thugs and Ivy's plants. (If the electrified water is shut down) Thomas survives. Thomas must have survived the events of the Arkham Incident and returned to his normal duties after The Joker was taken to custody and The G.C.P.D took control of the Asylum before it was closed down by Mayor Warden Sharp. 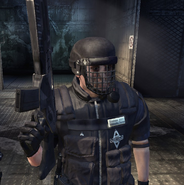 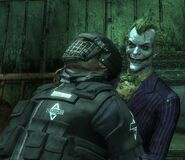 Add a photo to this gallery
Retrieved from "https://batman.fandom.com/wiki/Thomas_Armbruster?oldid=201124"
Community content is available under CC-BY-SA unless otherwise noted.