A master assassin and one of Ra's al Ghul's most trusted servants, the ever vigilant and loyal bodyguard of Al Ghul, Ubu never allows anyone to get too close or precede the glorious steps of his master. Ubu has had to curb his anger toward Batman and be patient with his master's respect and admiration for The Dark Knight. Still he harbors much jealousy towards Batman. There have been several Ubus throughout the Batman comics.

Ubu is the loyal manservant of eco-terrorist Ra's al Ghul. When Ra's decided to retire as leader of the League of Assassins, he sought to find a worthy successor in Batman. Ra's and Ubu traveled to the United States and infiltrated the Batcave. Ubu assisted Ra's in staging a false kidnapping of Ra's' daughter Talia in order to enlist the Batman's services. He accompanied both men first to Calcutta India and later to the Himalayan Mountains in search of the "missing" Talia. Ubu donned a mask and acted as the Supreme Brother of the Brotherhood of the Demon, but Batman easily deduced his true identity and defeated him decisively in combat. At one point Bane took the mantle of Ubu.

As first impressions go, Ubu made a doozy, shoving The Batman to one side when the Dark Knight showed signs of exiting the Batcave ahead of his new would-be partner Ra's Al Ghul. Ra's explained that the hulking, bald man was "trained to my COMPLETE service ... and a trifle OVERZEALOUS."

It was Ubu who unwittingly tipped off Batman to the fact that the abduction of Robin and Talia was, for the most part, a set-up. Nearly killed by a leopard in a darkened room, the Dark Knight had one question in retrospect—why didn't Ubu allow the Master to enter the doorway first ? The answer, of course, was that it was all a test that Ra's had orchestrated to test the detective's abilities as both his successor and prospective son-in-law. For his part, Ubu played the alleged kidnapper, briefly confronting the Dark Knight with a ram's head mask. 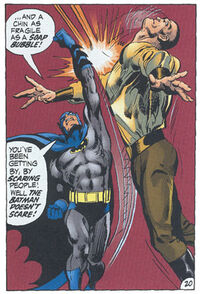 Ubu returned briefly in Batman #243, now playing bodyguard to Talia in Switzerland. Knocked unconscious by Batman, the underling was forgotten as Ra's (newly-resurrected by the Lazarus Pit) and Talia fled in #244.

The Pit had not been shut down properly and, within hours, an explosion rocked the Swiss Alps. The semi-conscious Ubu was caught at ground zero. The accident left Ubu with severe burns and an unwavering green glow that made it clear that the man had been permanently altered. Ra's' servant was taken into the care of two Swiss doctors, Varnov and Kolb, who hoped to ascertain the secret of immortality from the giant's body. Muttering about revenge against millionaire Bruce Wayne, Ubu fled and the doctors followed, gambling that he would seek out Wayne in Gotham City. Ubu ended up in Wayne Manor, the now-abandoned sight where he had seen Bruce unmasked as Batman. Ubu had killed Kolb and left Alfred for dead before Batman arrived on the scene and learned of Varnov's true motives. Ubu lunged at Batman and, caught in a stranglehold, the desperate Dark Knight kicked the giant in the stomach, knocking him backwards, where "he impaled himself on that splintered railing."

Life went on for Ra's and, by 1978, he had replaced Ubu with a lookalike named Lurk (DC SPECIAL SERIES #15, by O'Neil, Michael Golden and Giordano). "I've fought your kind back on that mountain in the Himalayas," Batman said between punches, "and it won't be any different here. You're immensely powerful -- but Ra's does your thinking -- and battles are won by brains as much as by brawn."

In DETECTIVE #490, Lurk deviated from Ra's instructed attack on the Sensei's men to take a shot at Batman and ended up failing in his primary mission. "You really fouled this one, friend. Ra's is going to be VERY unhappy. If I were you," the Dark Knight suggested, "I'd find a place to hide -- preferably on another planet."

The opening chapter of Marv Wolfman's "Lazarus Affair" multi-parter (in late 1980's BATMAN #332) added another wrinkle to the origins of Ra's' underlings when Batman was confronted by several bald, hulking "mutates," ordinary men who been altered in a laboratory to become "unstoppable dreadnoughts." It was no great surprise to learn that the master of the mutates was Ra's Al Ghul himself (#334-335).

Mike W. Barr and Trevor Von Eeden introduced the next of Ra's' bodyguards in 1982's BATMAN ANNUAL #8. Though he possessed the same temperament as his predecessors, Grind actually had hair—a black crewcut. He returned in Barr's SON OF THE DEMON (1987) and BRIDE OF THE DEMON (1990). Left for dead by the mad Doctor Carmody, Grind was presumably killed in the subsequent explosion of Ra's' mountain fortress.

Ubu made a surprising reappearance in BATMAN: BANE OF THE DEMON #1-4 (by Chuck Dixon, Graham Nolan and Tom Palmer), his face now hidden behind a hockey-like mask. Wearing a variation of BATMAN #232's ram's head mask, he appeared to perish once again in #4, this time at the hands of Bane, who took the giant's place at Ra's and Talia's side.

Mistaking Bane (his face hidden by the ram's helmet) for Ubu, Batman explained to Tim Drake that "there seem to have been many Ubus. I'm sure I've never encountered this one before". More recently, Ubu had appeared in BATMAN: THE CHALICE and (without) in JLA #43.

Ubu has also appeared in BATMAN: DARK KNIGHT OF THE ROUND TABLE #2, JLA: THE NAIL #2 and SUPERMAN & BATMAN: GENERATIONS #3.

Ubu possesses the strength level of a man his age, size and weight who engages in intensive regular exercise. Standing at about 6' 10", Ubu's immense size intimidates others into engaging in combat with him, and as such, he has very little true fighting experience. His lack of physical discipline also yields an extremely low stamina. Batman once managed to knock Ubu unconscious with three solid punches.

Ubu appeared in Young Justice, and was portrayed by Fred Tatasciore.

Batman: The Brave and the BoldEdit

Ubu appeared in Batman: The Brave and the Bold.

Bruce Thomas played Ubu in Son of Batman. In the film, he was a henchman of Deathstroke who helped Deathstroke attack the headquarters of the League of Assassins. After the Death of Ra's al Ghul, he escaped with Deathstroke in a helicopter.

Later in the film, Ubu helped Deathstroke kidnap Dr. Kirk Langstrom and his family in order to force him to make the Man-Bat Formula.

Later in the film, in his loft, while Ubu entertained two prostitutes, Damian Wayne broke in and attacked him. Ubu fought Damian across Gotham with his metal sword gaunlets where they stopped at a street where Damian defeated him and demanded the location of Deathstroke, but Ubu refused to talk. Just as Damian was about to kill Ubu, Nightwing stopped him.

Ubu was later sent to a hospital where he was overseen by Commissioner James Gordon and the GCPD. Batman contacted Gordon to check on Ubu, but Gordon said that it's a miracle that Ubu could breathe. Batman says he'd stay in touch and Ubu remained in the hospital for the rest of the film.

In the film, Ubu had an appearance and wielded sword gauntlets that were similar to Bronze Tiger.

Retrieved from "https://batman.fandom.com/wiki/Ubu?oldid=210081"
Community content is available under CC-BY-SA unless otherwise noted.