Sivi Aberg
Undine was the beautiful, but deadly henchwoman of the Joker.

She worked at the surf hangout called the Hang Five at Gotham Point, but was also an undercover spy for the Clown Prince of Crime.

Undine worked at the Hang Five with her boss Hot Dog Harrigan, she used a radio disguised as a ordinary hot dog to inform Joker of what was happening. She helped Joker and his henchmen Riptide and Wipe-out grab her boss, tying him up and dumping him in a nearby trash can.

She also took part in the Joker's twisted scheme of kidnapping surf champion Skip Parker and transferring all Skip's knowledge of surfing with a Surfing Experience and Ability Transferometer that included a Vigor Reverser. His plan was the become the world's greatest surfing champion so that the whole world would be at his command.

Knowing that the Dynamic Duo Batman and Robin was onto them, she went and informed Joker at his Ten Toes Surf board shop hideout.

Joker and his henchmen then surprised the duo who broke through the window by throwing poisonous sea urchin spines at them and then taking them to be made into surf boards.

However the Dynamic Duo escaped, freed Skip Parker who was locked in a work bench and went off to the Hang Five where Undine was with Joker who was boasting of his new surfing talents and preparing to take part in the surfing champion ships.

To Undine's surprise, Skip suddenly appeared, followed by Batman who challenged to compete against Joker in the surfing championship. Joker at first refused, but a boy named Dick Grayson who was representing the contest told him there would no championship without Batman and enters him in.

They all then go to the beach where Undine is certain that Joker won't lose. Batman and Joker begin surfing and it seems that the Clown Prince of Crime is winning, but when Joker returns to the beach, the judges only gave him one point for being the more colourful surfer while Batman got all the rest. To make matters worse, Hot Dog Harrigan is found after pounding away from his trash can. Knowing that they have been foiled, she flees along with Joker and his henchmen and try to lock themselves in the Hang Five.

However Batman and Robin along with their new partner Batgirl subdued the Clown Prince of Crime and his henchmen while she stood away shocked by the furious fighting and was finally arrested by two beach combers who were really Police Commissioner Gordon and Chief O'Hara in diguise. She taken away to be imprisoned at Gotham State Penitentiary along with Joker and the rest of his gang.

Sivi had previous played one of Chandell's henchwomen Mimi in Season 2 of the show. 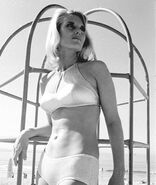 Add a photo to this gallery
Retrieved from "https://batman.fandom.com/wiki/Undine?oldid=216751"
Community content is available under CC-BY-SA unless otherwise noted.