The Catwoman
The Joker
The Penguin
The Riddler

The United Underworld is an evil organization that is formed in the 1966 Batman movie. Its main members are the four main enemies of Batman: The Catwoman, the Joker, the Penguin, and the Riddler. Several pirates were working for them, the only ones with names being Morgan, Quetch, and Bluebeard. Their base was inside a bar next to the ocean. Their objective was to take over the world, and to kill Batman so he couldn't stop them.

Their logo is of a giant octopus squeezing the world with it's tentacles around the words: "Today Gotham City. Tomorrow the world."

First they kidnap Commodore Schmidlapp, though through illusions that he is still on a ship, he doesn't realize he has been kidnapped. Then, using an illegal projector, they project an image of the yacht to lure Batman and Robin into a trap, where Batman is attacked by one of the Penguin's exploding sharks, however Batman survives with a can of shark repellant. They discover that the Penguin has his own submarine, whose missiles the Riddler uses to write riddles.

The Riddler comes up with a combination trap: For Catwoman to disguise herself as Ms. Kitka with one of the Riddler's riddles, to lure a millionaire into a kidnap trap, and when Batman will come to rescue him, he will step on the Joker's jack in the box and go flying into the sea where the Penguin's exploding octopus waits. Unfortunately for them, the millionaire they choose is Bruce Wayne, and are unaware that he is Batman. A fight breaks out at their base, resulting in an unnamed henchman falling onto the jack in the box and being killed by the exploding octopus. Bruce escapes from them but is unaware that Ms. Kitka is really the Catwoman.

Afterward, the Penguin disguises himself as Commodore Schmidlapp, and gets Batman and Robin to take him to the Batcave (putting him to sleep so that he can't see the entrance). Unbeknownst to Batman and Robin, the Penguin has five dehydrated pirates (referred to as Guinea Pigs, as they are the first victims of the dehydrating device that turns people into dust) with him, and rehydrates them. However, he accidentally uses heavy water instead of light water, resulting in the five guinea pigs vanishing when they touch anything.

The Joker, the Riddler, the Penguin, and the Catwoman enter the United World building and dehydrate the nine members of the security council and take them aboard their submarine. Batman and Robin go after them in the Bat Boat and draw the submarine to the surface, where the Dynamic Duo fight all the villains. All but Catwoman are knocked over the edge into the water (some of them more than once, like the Riddler) and eventually chained to the side when Catwoman knocks Batman and Robin off. When they climb back up, and she goes back into the submarine, she trips and falls down and her mask falls off, revealing to Batman and Robin that she is Ms. Kitka. Robin places her in batcuffs and Batman calls the coast guard, thus all the members of the United Underworld are captured. 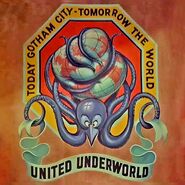