Batman
Robin
Batgirl
The Utility Belt is the iconic storage device used to carry most of Batman's gadgets and equipment. Often depicted as part of the Batman Family members' costumes, it is used to house various equipment for the heroes to use or access at short notice. The exact contents of this belt are not known and Batman usually changes them to suit his needs. In some stories, his enemies have attempted to steal or replicate the utility belt, believing it will give them an advantage over him.

The utility belt mainly consists of a strap, buckle and storage compartments. Various designs and materials have been used in its components, changing depending on the time period. The belt's compartments have been specially locked, with only Batman knowing how to open them. In addition to these, the utility belt has been modified to perform different functions by itself. These have include communications equipment, controls for the Batsuit's functions and defense mechanisms to prevent tampering.

As technology has evolved, the array of devices Batman carries have become more complex over time. In most stories, it will often carry Batarangs and either the Batrope or a Grapple Gun. The belt has also carried on different occasions a gasmask, a rebreather, flash and gas grenades, explosives and a detonator, lockpicks, restrains, a signaling device for the Batmobile, electronic surveillance equipment (including video camera and monitor), forensic kits for gathering and storing crime scene evidence, a torch, a medical kit, a cache of money and, in early incarnations, a pistol in a holster. 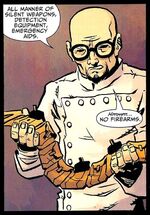