Batman Wiki
Register
Don't have an account?
Sign In
Advertisement
in: Villains, Arkham Asylum patients, The Society Members,
and 3 more

Batman: Shadow of the Bat #1

Victor Zsasz (referred to as Zsasz or Mr. Zsasz) is a serial killer and a nemesis of Batman. He usually kills with a knife and carves a tally mark somewhere on himself for every victim.

Zsasz was the head of his own international company and had amassed a large personal fortune in addition to his family's wealth. At the age of 25 his parents died in a boating accident, sending him into a deep depression. He turned to gambling, losing money in competitions around the world. He gradually squandered his entire fortune, ultimately betting everything he owned against the Penguin at a Gotham Casino. "My body flushed with adrenaline. I'd never felt so excited. Surely, this was the ultimate rush". The Penguin cheats and Zsasz loses the match; afterwards realizing that his life was empty, driven by desire, and there was no point to his existence.

Stunned, he became convinced that "there was nothing at all at the center of [him]...no reason for being, no motivation, no purpose. [He] was just a robot, sleepwalking from one distraction to another, hiding from the truth." While he was attempting to commit suicide by jumping from Gotham Bridge, a homeless man tried to assault him with a knife after he refused to give him money. Instinctively grabbing the knife, Mr. Zsasz saw in the man's eyes that all life is meaningless and that nothing nor anyone matters. Mr. Zsasz had seen "nothing. He was a robot, driven by forces he didn't even know exist. He was a beast, an animal, a subhuman. Only death could ever save him from his own emptiness." He then proceeded to stab the man to death as a "gift" for saving his life. From then on, he dedicated himself to "liberating" others from their pointless existence (Mr. Zsasz often refers to victims as "zombies"). Mr. Zsasz recalled that "[he] had found [his] true calling: helping poor beasts shuffle off this mortal coil." Making a cut on his arm for his first victim, Mr. Zsasz began a tally on his body that would grow to include more than 143 other scars. He usually preys on young women, but has no qualms over whom he murders. He slits his victims' throats and leaves them in lifelike poses, adding a tally mark to his body each time. He has been diagnosed as insane and is regularly incarcerated in Arkham Asylum courtesy of Batman, breaking out on occasion to carry on killing. During his debut appearance in Shadow Of The Bat's opening story arc, Batman: The Last Arkham, Mr. Zsasz bribes a contractor to include a secret passage leading out from his cell during the asylum's reconstruction under its new head, Dr. Jeremiah Arkham, who inherited the asylum from his uncle, Amadeus Arkham.

Although Mr. Zsasz is restrained during the daytime when he is being treated personally by Dr. Jeremiah Arkham, he is brought back to his cell at night where he would leave the asylum through the secret passage, unbeknownst to the prison-guards. After murders fitting Mr. Zsasz's modus operandi begin surfacing, Batman and Commissioner Gordon fake the Caped Crusader's insanity in order to get him inside the asylum and investigate Mr. Zsasz. Dr. Jeremiah Arkham is exceptionally brutal towards Batman, who had supposedly murdered a police officer; over the course of the "treatment," Mr. Zsasz had warped Dr. Jeremiah Arkham's mind and turned him into a mere henchman. Due to these continuous conversations with Dr. Jeremiah Arkham, Mr. Zsasz realizes that Batman is a plant and subsequently murders both the contractor and another inmate at Arkham Asylum who knows of Mr. Zsasz's ploy. However, both Nightwing and Batman catch up to Mr. Zsasz when he tries to escape for the final time and re-incarcerate him in Arkham Asylum. Mr. Zsasz later appears in Part 3 and 4 of the Knightfall saga. In Part 3 of Knightfall, Mr. Zsasz takes an all girl's college hostage and holds the students at knife point until Batman arrives, briefly leaving to kill two policemen who were sent to arrest him. Though weakened both physically and mentally, Batman fights with Mr. Zsasz and tries to ignore the lunatic's mockery. However, he is finally driven partially insane after Mr. Zsasz says that they are really one and the same and administers a savage beating. In The Batman Chronicles #3, a psychiatrist found herself unable to understand why the serial killer did what he did. "You don't exhibit the usual signs of mental illness. No voices, no hallucinations, no dementia. Why do you kill?" she asked him.

"I have no dysfunctional family background. I suffered neither childhood abuse or trauma. I kill for ONE reason only, doctor -- because I CHOOSE to."

Luring the doctor to the edge of his cell, Zsasz thrust his arm out, grabbing her by the throat ("There's no use struggling. I practice isometrics for sixteen hours every day.") Dropping the corpse to the floor, Zsasz repeated "I kill because I want to kill. Because I choose to kill."

Zsasz later appears in Detective Comics #796, where he fights Stephanie Brown in her role as Robin. He attempts to slit her throat, but is distracted by her unexpected ferocity and falls back, where he attacks and attempts to kill Batman. However, Stephanie eventually defeats him. Zsasz makes a brief appearance in Infinite Crisis #7. He is part of the Secret Society of Supervillains and is one of the many of their members sent to attack the city of Metropolis. The Society loses.

Mr. Zsasz is not seen in any major role again until Detective Comics #815, released in March 2006, entitled "Victims". Before a quarterly psychiatric review, Zsasz kills his guards with metal poles attached to his neck bracket and escapes to kill again. Batman hunts for Zsasz, which proves unsuccessful until Zsasz gains access to a charity event (attended by Bruce Wayne) and stabs his beloved butler, Alfred Pennyworth, in the stomach. However, Wayne saves Alfred's life by driving him to a hospital. To lure Zsasz to him, Wayne holds a press conference in which he announces that Alfred is still alive. Having already made a scar for Alfred, Zsasz realises that his tally is off by one (Zsasz remarks: "My skin... it's crawling... every inch of it feels... wrong.") During the second part of "Victims" (Detective Comics #816), after a fight with Batman, Zsasz proceeds to the hospital to finish off Alfred. Batman catches him off-guard and knocks him unconscious, thus saving Alfred's life and sending Zsasz back to Arkham.

Zsasz is later seen again the Gotham Underground story arc where in issue 3, he appears in a disguised Batman's cell at Blackgate Prison, having been hired for the murder of Matches Malone. Zsasz attempts to kill Batman with a knife. He ends up cutting Batman's arm just as he was waking up and the resulting fight ends with Zsasz being knocked unconscious and Batman being rushed to the hospital.

Zsasz is one of the Arkham inmates forced to work for Black Mask. He becomes one of Black Mask's more trusted agents, and is given free reign to do as he wishes. With the money he is given, Mr. Zsasz starts up a gladiatorial arena in which children are forced to fight first each-other, and then Zsasz himself. Batman and Robin go to investigate. Robin lets himself be captured without Batman's knowledge. He is surprised by Zsasz's skill in the arena, and is incapacitated. Before Zsasz can deliver the killing blow, he is stopped by Abuse, who had been captured alongside Robin. Robin recovers and defeats the madman. 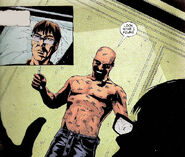 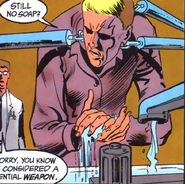 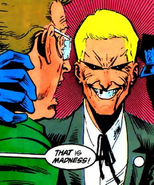 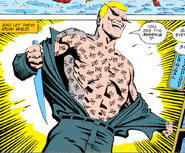 The Arkhaverse version of Zsasz appears briefly in Batman: Assault on Arkham.

In the film Birds of Prey, Victor Zsasz is portrayed by actor Chris Messina and is the right-hand-man turned lover of Roman "The Black Mask" Sionis. Here is is a serial-killer, torturer and assassin who had operated for 15 years and even took part in the massacre of the Bertinelli Crime-Family. This lead to his undoing as he was eventually shot in the chest by the Huntress.