"Find my phone now, Batman, or I'll carve this man's existence into my flesh."
―Zsasz to Batman over a payphone within Arkham City[src]

Born into a life of luxury and wealth, Victor Zsasz lost his grip on reality after the tragic deaths of his parents at a young age and the loss of what remained of his inheritance money after a night of ill fated gambling at the Iceberg Lounge. Believing all life to be meaningless, Zsasz takes it upon himself to murder as many people as he can in order to cure them of life, seeing them as nothing more than zombies stuck in an endless loop of misery. Carving a tally mark into his skin after every murder as proof of his work, the only concern in Zsasz's life is body count and the amount of marks on his body.

After frequent run-ins with Batman, Zsasz developed an immense hatred and fear of the hero and has been saving his final mark for the Dark Knight himself. Within Arkham City, Zsasz uses the facility to further his own sick desires of murder and mutilation and begins killing dozens of inmates who answer pay phones he dials, eventually becoming known as "The PayPhone Killer". He hoped that, one night, Batman would be on the other end of the receiver and the mark he saved specifically for the hero would finally be carved into his skin.

A true sociopath, Zsasz grew up in a life of ease and inherited a large amount of money from his parents. His life took a turn for the worse when he went to the Iceberg Lounge and bet nearly all of it in Poker. He was on a winning streak but lost to "the disgusting midget who ran the place", the Penguin. Now penniless and alone, Zsasz went into the streets where he was attacked by a mugger, whom he killed with his own knife. Using the knife, he carved his first tally-mark into his skin and found himself elated by it and became a serial killer. Indiscriminate in his prey, body count is the only thing that matters to Zsasz. He carves a tally mark for each of his victims into his own body, and is saving a special spot for the Batman.

Victor Zsasz was already imprisoned in Arkham Asylum before of the events of Joker's takeover of the island. During a patient interview between him and Dr. Cassidy, Zsasz revealed through scary clues that he knew of Dr. Cassidy's four locks on her apartment door, how she forgot to buy cat food "again" and how every night she sat in her red chair with her cat on her lap (revealing that he stalked her before his imprisonment). Both scared and worried that Zsasz knew where she lived; Cassidy took leave from Arkham in order to get away from the insane serial killer.

Soon after Dr. Cassidy took her leave; Zsasz managed to smuggle a knife into his cell during another patient interview. Zsasz lashed out killing all guards sent into his cell to stop him. Victor was forced to surrender when four guards aimed their shotguns at him; Zsasz was then sent into solitary confinement for his actions, long enough to carve in 20 new tally marks. However Victor didn't stay long in solitary nor in Arkham for that matter; he soon escaped Arkham and returned to Gotham City to kill Dr. Cassidy.

After the door was answered, Zsasz kidnapped Sarah. Zsasz took Dr. Cassidy to an Old County Hospital in order to kill her. An anonymous tip was found in Cassidy's office, leading Batman to the hospital, where he saved Cassidy from her gruesome demise. Zsasz was subsequently put back into Arkham; vowing that one day he will kill the Dark Knight if he ever got the chance.

During the Joker's takeover of Arkham, Zsasz was let loose from his cell in the Intensive Treatment Center. Running free, he encountered two Arkham security guards in the Patient Pacification Chamber. After killing one guard who tried to stop him, he took hold of another guard named Mike, and strapped him to an electric chair. A third guard, Zach Franklin, came across Zsasz, and sounded the alarm, requesting backup on the radio. At least three more guards responded to the alarm and arrived with Dr. Gretchen Whistler, Zsasz's personal therapist. He warned that he would kill Mike if he saw "anything that looked even a little bit like a bat" getting too close whilst the guards attempted to talk him down. Zach Franklin and another guard stood barred at the entryway to the Pacification area, but were able to see Zsasz pacing behind his hostage in the electroshock chair. Franklin tried to call for more backup in the Processing Corridor in dealing with the hostage situation, but found no answer on the radio, as most of the other guards in the vicinity had been murdered by the Joker after his escape through the area. A surviving guard, Eddie Burlow, picked up the call near the door to the Decontamination Chamber but was unable to respond. He directed Batman to the Patient Pacification Chamber. Batman arrived on the scene and met Zach Franklin, who informed him of the situation. Batman used the chamber balcony and grappled behind Zsasz on the gargoyles that lined the top of the room. He snuck up on Zsasz, taking him out and leaving him back in the care of Dr. Whistler and the Arkham staff. He warned Dr. Whistler that it would take much time before Zsasz could be cured, if he could be cured at all. Soon after, Harley Quinn trapped the Arkham staff in the Pacification Chamber. One of the security personnel covered Zsasz with his shotgun to prevent any escape.

But yet Mr. Zsasz somehow escaped once again, killing three security guards above the Penitentiary in Arkham West. He then proceeded to prop them up like rag dolls around a table as if they were enjoying a game of cards. After the Joker's men had taken control of the Penitentiary, Zsasz proceeded to the heavily-guarded Arkham East. While the Joker's men wrestled the area from the guards, Zsasz invaded the Botanical Gardens. He entered the Botanical Glasshouse Entrance, where he encountered three more members of security at the doorway to the Botanical Glasshouse. Zsasz murdered two of them, arranging the dead guards in a lifelike pose around a park bench. After killing several more Arkham staff, Zsasz scratched out the tallies of his kills onto the bench. Shortly after, The Joker came across Zsasz in the Glasshouse Entrance with his latest victims. ("No doubt acting out some twisted fantasy", according to Joker) The Clown Prince of Crime took Zsasz to the Arkham Mansion after his men had captured Dr. Penelope Young in the Library, planning to torture the formula for her secret Titan drug out of her. Mr. Zsasz asked to be left alone with Young and successfully forced the secret out of her. Batman searched the mansion until he came across Zsasz, who was holding Dr. Young hostage with a knife to the throat. The Joker, contacting Zsasz via a monitor, tried to convince Zsasz to hurry up and kill her. Zsasz began to panic as he knew Batman would take him down if he did just that but he was also torn by his desire to kill her, slowly savoring her fright and saying that she was "just begging to be slaughtered". Before he could make a decision, Batman knocked him out with a Batarang to the head.

Dr. Young was driven to so many tears while Zsasz held her hostage and nearly killed her. She beat his unconscious body angrily, yelling at him "You monster! You evil, evil, evil monster!", while still crying. After Young was killed by an explosive set by Joker and Harley Quinn set her goons on Batman, Zsasz disappeared, suggesting that he escaped during the chaos, as no guards had arrived to detain him.

His final appearance was in Batman's hallucination of a replay of the game's opening sequence caused by Scarecrow's Fear Toxin. Batman was placed in the captured position, with Joker capturing him, and Zsasz among the Arkham inmates escorting Batman in the patient handcart. After this, Zsasz had no further appearance in the game and his status remained unknown.

Zsasz was briefly mentioned by Hugo Strange as an inmate he intentionally, but anonymously released so that Tyger forces could recapture him in order to boost Arkham City's credit as a safe prison. Upon admittance, Zsasz quickly became well known as a "payphone killer" in Arkham City, hooking up all the old phonelines with the help of the Broker and tracked and murdered anyone unlucky enough to answer on of his calls after being briefly imprisoned by Penguin in his museum. He briefly appeared in Two-Face's trial against Joker as a juror, and also agreed to condemn Joker to death.

"Find my phone Batman, or the killing starts..."
―Zsasz to Batman over a payphone within Arkham City[src]

After being incarcerated in Arkham City, Penguin somehow managed to capture him and lock him in a display case of his museum. However, after he broke free, Zsasz continued his efforts to murder and targeted a group of political prisoners that had been placed into the city by Hugo Strange. Zsasz would call random payphones in the city and would use them to lure people to him. Batman eventually started to intercept the calls as they were being made. Using the batcomputer, Batman was able to deduce the location of Zsasz's lair and found him there with a group of people he intended to make his next victims. Batman engaged Zsasz and locked him into a cage in Zsasz's own hideout.

"A Psychopath, Zsasz would fit perfectly into the disorganized asocial category of serial killer if not for his special fixation on the Batman. His motives are power and control, which he expresses quite literally by carving a scar into his skin to mark each of his victims. His obsession with the Batman is also manifested in a physical way: He is saving a special spot to scar when he kills the Dark Knight."

"It's rare that an asocial serial killer motivated by control would have no history of childhood trauma; the exact reasons for Zsasz's behavior remain a mystery."

"His low IQ further hampers my attempts to treat him. He spent hours at a time ritualistically counting the marks in his skin."

Extremely unstable!!! Not a canditate for a new research.

There is no doubt that the world would be a safer place without Victor Zsasz, but why send him to the electric chair when he can serve to punish his fellow inmates at Arkham City? Zsasz's blood-lust continues unabated and rules his every action. Personnel are cautioned to avoid any form of contact with this enthusiastic and consummate murderer. 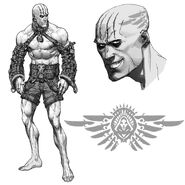 Zsasz's Personal items
Add a photo to this gallery

Add a photo to this gallery
Retrieved from "https://batman.fandom.com/wiki/Victor_Zsasz_(Arkhamverse)?oldid=165393"
Community content is available under CC-BY-SA unless otherwise noted.