"...I know the rage that drives you. That impossible anger strangling the grief until the memory of your loved one is just...poison in your veins. And one day, you catch yourself wishing the person you loved had never existed...so you'd be spared your pain. I wasn't always here in the mountains. Once, I had a wife...my great love. She was taken from me."
―Ra's al Ghul to Bruce Wayne[src]

The Warlord's Daughter was the wife of Ra's al Ghul and the mother of Talia al Ghul. She was portrayed by India Wadsworth in The Dark Knight Rises.

While he mentored Bruce Wayne, Ra's told him that his wife's murder taught him that there are those without decency who should be fought without hesitation or pity. This gave Bruce a much better understanding of Ra's, as they had both lost someone they loved.

Approximately thirty years before the events of the The Dark Knight Rises, the warlord's young daughter met a skilled mercenary working for her father. They fell in love, married in secret and conceived a child. When the warlord later found out, he had planned to place the mercenary in The Pit, but the daughter convinced the warlord into exiling the mercenary instead, and unknown to the mercenary, took the mercenary's place in the pit. There, she gave birth to a daughter that she named Talia, who spent the first years of her life locked up with her mother. One day, the doctor forgot to lock the door to their cell and the other inmates eventually attacked and murdered Ra's' wife, but her child was protected by a prisoner known as Bane, who also assisted in her escape from the Pit.

During this time, the exiled mercenary had joined the League of Shadows and became known as Ra's al Ghul. Talia found her father and brought him back to enact terrible vengeance upon the prisoners of the Pit, with the exception of Bane.

Talia later told Batman that Bane was exiled from the League by Ra's because he was a constant reminder of the hell her father left his wife to die in, and that the only crime that Bane committed was that Bane loved Talia. 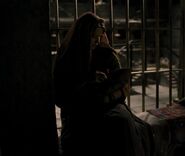 The Warlord's daughter and baby Talia. 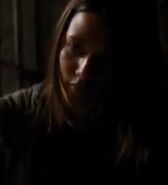 The Warlord's daughter looks at her young daughter, Talia
Add a photo to this gallery
Retrieved from "https://batman.fandom.com/wiki/Warlord%27s_Daughter?oldid=176702"
Community content is available under CC-BY-SA unless otherwise noted.