Outskirts of Gotham City
Wayne Manor was the ancestral home of Bruce Wayne. He was raised there from birth, first by his father, Thomas, and mother, Martha, and after their death, by his butler and surrogate father, Alfred Pennyworth.

Several hidden entrances led to the Batcave, which rested underground and was beneath Wayne Manor.

The original estate appeared to be in a different location surrounded by the vast fields and wooded areas of the Wayne property, though still connected to the large network of caves underground.

Vicki Vale and Alexander Knox attended a benefit at Wayne Manor, where Bruce was taken by Vicki's charm.

A second house was built near the edge of a cliff, overlooking Gotham Harbor. A passage way to the Batcave was uncovered by turning on the lights of a miniature Wayne Manor in the aquarium in the library and dropping through a false floor in an iron maiden. A garden hedge maze grown outside. On the roof a network of mirrors were set up to reflect the light of the Batsignal into Bruce's private study.

Relighting of the Tree Ceremony

Bruce Wayne set up a date with Selina Kyle to watch the Relighting of the Tree on tv. The pair sat on a couch in the foyer in front of the large fireplace, kissing passionately until Selina realized she was late in taking part in the kidnapping of the the Ice Princess.

A third version of the house was built in similar proportions to the second estate, presumably on the same location on the edge of a cliff overlooking the bay. A underground tunnel was built connecting Bruce's office at Wayne Enterprises all the way to the Batcave, which he could reach within minutes via super fast bullet-tube. A circus performer named Dick Grayson eventually discovered an entrance to the Batcave that was concealed behind a silverware storage cupboard. This eventually led to him becoming Batman's partner.

Destruction of the Batcave

Two-Face's Thugs invaded the estate and interrupted Bruce's date with Dr. Chase Meridian once. This was prompted by the Riddler's discovery of Wayne's secret identity after the NygmaTech party. After the house was sieged Ridder used a device in his cane to find Alfred secret silverware cupboard.

Barbara Wilson came to live at the third house after hearing of her uncle Alfred's illness. This was kept secret from Bruce and Dick, though Wayne later deduced what was going on. Dick witnessed Barbra stealing one of his motorcycles using the estate's surveillance system. This is how he learned of her street racing to fund Alfred's medical expenses. Later after defrosting the city at Gotham Observatory, two vials Mr. Freeze's cure to stage one of MacGregor's Syndrome were acquired by Batman. After returning home the trinity's Ice Armor was removed in haste, when Bruce hooked up Alfred's IV he was still wearing his Sonar bodysuit at his bedside. Dick and Barbara couldn't sleep and ordered pizza, resting in the foyer until dawn. Alfred rose at the top of the staircase to greet them, insisting that were going to have to build a larger cave.

For the exterior shots of Wayne Manor in Batman, Knebworth House, a Gothic Tudor mansion that was 28 miles north of London, was used. The interior shots, however, were shot at Hatfield House, Hertfordshire; the gaming room from the film used the mansion's long gallery, and the marble hall was used for Bruce's 'arsenal' with the two-way mirror.

In Batman Returns, a scale model was used for the exteriors of Wayne Manor.
In response to the noted iron maiden entrance to the Batcave, director Tim Burton remarked: "The iron maiden is a torture device, so you know, him being a tortured individual, you could see him connecting to that on some level emotionally and I thought it would be a good image."

In Schumacher' films, Batman Forever and Batman & Robin, the Webb Institute in Glen Cove, New York was used for the exterior shots of Wayne Manor.

The notion of opening a secret door to their hideout using a submerged model building in a fish tank reappeared in Red Robin #25, where Tim Drake used the ploy to access his new headquarters in Gotham. 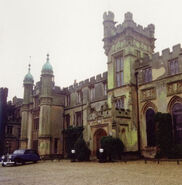 Batman (1989 Movie Comic Adaptation).
Add a photo to this gallery

Add a photo to this gallery
Retrieved from "https://batman.fandom.com/wiki/Wayne_Manor_(Burtonverse)?oldid=209554"
Community content is available under CC-BY-SA unless otherwise noted.