None
The Zodiac Master is a masked supervillain who made his presence known in Gotham City by accurately predicting a series of disasters, all of which he secretly orchestrated. Having duped most of the city, he then offered his services as an underworld consultant, using his supposed astrological skills to foretell the outcome of various proposed crimes.

Introduced in late 1963's Detective Comics #323, the Zodiac Master has a minor claim as the final new villain that Batman and Robin fought before the advent of the Julius Schwartz-edited era launched in Detective Comics #327. Wearing a light blue cowl and body suit festooned with astrological signs, he concocted an elaborate scheme to become a known underworld figure.

Little is known of the Zodiac Master's personal background. He first appeared on a pier claiming that a departing ocean liner was headed for certain doom. Two policemen on the scene ordered him to leave before they charged him with disorderly conduct, but shortly afterwards the ship collided with an oil tanker.

Several days later, the Zodiac Master reappeared at the Gotham International Airport, standing on the runway and stalling an airliner's takeoff. As before, he warned that the constellations had predicted the plane and its passengers would meet with a tragic end. While being approached by Batman, he hurled a projectile shaped like a ram's head at one of the airliner's engines, destroying it. Batman and Robin were then ensnared by a bola released by a scorpion-shaped projectile to prevent them from impeding his getaway. When the plane was repaired, a defective control wire was discovered, lending credence to the Zodiac Master's prophesy.

The following week Gotham was the target of a protracted crime wave waged by the city's most notorious organized crime rackets. When apprehended by Batman, some of the mobsters made reference to a "Mister Z" who "read signs" to determine the outcome of their robberies. The Dark Knight quickly deduced that Mister Z and the Zodiac Master were one and the same, and that he had sabotaged both the plane and the ocean liner to gain credibility as an astrologer. His real goal was to swindle the underworld by demanding 25% of the loot a gang planned to steal in exchange for predicting the outcome of their future crimes.

For a while, the Zodiac Master was content to go on collecting lucrative fees for his phony predictions, although he'd begun secretly planning a crime spree of his own. Batman was able to infiltrate his hideout by posing as a mobster, and although he apprehended Zodiac Master's henchman the madcap astrologer slipped through his grasp again. The only clue as to his future whereabouts was a sheet of paper with what appeared to be a horoscope calculated on it. By interpreting the zodiac signs on the paper Batman deduced that the Zodiac Master was planning to carry out a crime on August 5, which was under the constellation Leo and for which a favorable horoscope had been obtained. The date coincided with an exhibit of ancient Cretan artifacts in Gotham City, including a bejeweled golden bull. Given the obvious zodiac theme, Batman reasoned it was the Zodiac Master's target. Doodles of a Taurus sign confirmed his suspicions.

After a lengthy chase and battle at the Gotham museum, which unfortunately resulted in damage to some of the priceless Cretan relics, Batman apprehended the Zodiac Master with one of his own weapons: a rocket-propelled projectile shaped like the goat's head of Capricorn. (Detective Comics #323, January 1964)

The Zodiac Master never fought the Dynamic Duo again, although a file was retained on his brief supervillain career as part of Batman's Bureau of Missing Villains. (Batman Family #14, 1977)

In the Solo mini-series, the Zodiac Master escapes incarceration and is recaptured by Batman, who erroneously refers to him as "the human Firefly". Police Commissioner James Gordon is not impressed, as Gotham was then undergoing race riots, which he considered a greater priority than stopping largely harmless costumed villains. These circumstances were later revealed to have occurred solely in Batman's imagination after he was rendered comatose during a clash with the Riddler. (Solo #7, December 2005) 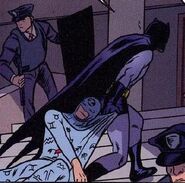 Although never directly appearing in the show, Zodiac Master likely inspired the villain Nostromos who appeared in the episode Prophecy of Doom as both characters are astrology themed and partake in schemes which involve telling prophecies of disasters to wealthy men only to later stage the disasters himself. Nostromos is an actor who's real name is Carl Fowler and who started telling prophecies of great disasters to Gotham's wealthy and elite only to later cause the tragedies himself. Fowler did this as to gain a following from the wealthy men all of whom he told that there was a great money crash coming and that they should transfer all of their funds into a private account which Fowler alone had access to. Fowler was however stopped by Batman before he could carry through with his crime.

The Brave and the Bold

The Zodiac Master has made two cameo appearances in Batman: The Brave and the Bold. He was depicted playing pool at a seedy underworld bar in A Bat Divided! and briefly resurfaced in Joker: The Vile and the Villainous!

The Zodiac Master makes cameo appearances in The Lego Batman Movie. One of his most prominent cameos shows him reading an Astrology book when Joker acknowledges him amongst other Batman villains.

Retrieved from "https://batman.fandom.com/wiki/Zodiac_Master?oldid=230765"
Community content is available under CC-BY-SA unless otherwise noted.